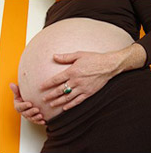 A talisman for Pregnancy

This talisman is designed for a woman who wants to conceive. The woman should take a red string, dip the ends in candle wax, which was used for blessing during circumcision (You need to melt part of the candle, first). Then, the woman makes a wish – to conceive. At the end, the woman ties the red string around her belly for a month, including during her period time

A pregnancy talisman – For a woman who has difficulty conceiving

The women should take a baby’s foreskin, who was just now circumcised, wrap in blue cloth, and keep it on her body during sexual intercourse

For writing a fertility talisman based on your name, date of birth and your mother’s name, please contact Isaac, or you can purchase the King Solomon Seals for fertility at our online stotre.

An amulet for new baby protection and improving his health

Using this amulet gives the baby protection from disease and injury.
Parents should take a few hairs of their head, add 7 drops of candle wax, which was used for blessing during circumcision or zeved habat ceremony, wrap in a white cloth, tie everything with a blue string and hide it in the baby’s room.

This talisman is designed to keep the baby in his mother’s womb.
Take 3 right wing feathers of a white dove. Tie the feathers with a red string in a fan-shaped. Put iit n a Torah scroll (Sefer Torah) for 7 days. After 7 days, take the feathers out from the book, put on the pregnant woman belly, and whisper “This unborn baby, who is inside of me, will cling to life until he comes into my arms. Amen, Amen, Amen”. Repeat this sentence 3 times. Then, tie the feathers in the air (Try not to put them on anything) until after birth.

This talisman is also called “gypsies talisman”, but its use is extensive, and most people use it as a talisman on the birth of boys or girls. Several Arab countries, is also added blue or red beads to it and made a bracelet, which the woman wears until the time of birth comes. To make the talisman, take a feather of a rooster (For boys) or chicken (for girls). In a bowl made of half a dried pomegranate (after you emptied all the seeds), pour olive oil. Apply a little oil on the woman belly with the feather for 21 days, since day she was supposed to receive her period