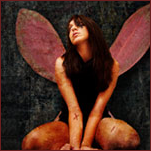 According to the Midrashim (interpretation of the Bible ) Lilith was Adam’s first wife, after her love to him gone, and a big fight she left him. according to Midrashim she moved to the Dead Sea area. Three angels were sent to call her back but she strongly refused, all their pleas were ignored nothing helped and she remained standing to her opinion. When the angels saw it did not go well they curse her and she vowed to haunt and fight Adam descendants relentlessly. Many nations fear that Lilith’s revenge so they developed various traditions and have various ways to protect themselves from her. In Judaism every community uses different way in order to defense against Lilith, they dress small boy children with girl’s clothes, because she doesn’t hurt girls, others call their children “Rtla” which means old but all the groups avoid praising the beauty of the baby for fear of Lilith’s revenge.

Lilith married Asmodeus King of demons that taught even king Solomon a lesson several times. one way to defense against Lilith and other demons or at all is the color blue, it is known demons are acting at night and one of the methods to prevent their entrance the house is painting the color blue on the door or front wall, that is according to Arab tradition. When the demons come at night and see the color blue, they think it’s still daylight and not go in to the house. Remember its only faith