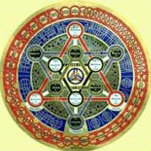 Mascot (emulate) is one of the most common known tools in the Kabbalah to recruit super forces. An emulate can be an object of some kind or parchment made of kosher animal skin, which are written in accordance with the mascot purpose with the sacred symbols and letters depending for the topics targeted, penalties for which it was prepared. In the Talmud era were emulates were written on various objects, like leaves or plants were considered sacred, but some wrote the mascots on copper plates, silver and gold. The most common mascot is written on parchment which is used for writing Torah scrolls made out of deer-skin slaughtered kosher slaughter. The parchment including mostly names of angels, god’s names, spells and incantations for different purposes.