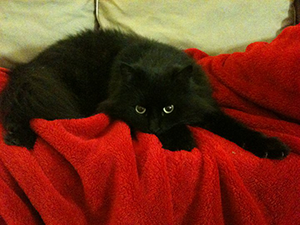 [/vc_column_text][/vc_column][/vc_row][vc_row][vc_column][vc_empty_space][/vc_column][/vc_row][vc_row][vc_column][vc_column_text]Black Cats and Superstitions
Do you believe it is a sign of ill fortune when black cats cross your path?
Why is black cat a symbol of a bad luck?
Is it true that black cat is a very ancient symbol of cheerfulness, mysticism,
witches and bad luck?
Black cats have played a major role for centuries in folklore, superstition and
mythology. The black cat is found in many cultures and again has different but
similar beliefs or representations, depending on the culture.
In the tarot, the black cat is found on the Rider Waite deck lying below the
queen of wands. The cat at her feet is represented here as a domesticated
instinctual energy. It shows the energy of playfulness that is anchored closely
to the consciousness mind.
In Egypt, the cats had a place of reverence in both their homes and temples of
worship. In Egypt there had been found a cemetery, that contained thousands of
mummies of black cats therefore they were also treated a royalty. If a cat was
killed in those times, the punishment was death of the assailant. The Egyptians
saw the cat as a nocturnal creature that walked the shadows in great confidence
with the fine ability to feel and sense the surroundings in the dark of night.
Therefore would be seen as an animal of the afterlife.
In Europe, the cat was seen as a negative animal and particularly if black in
color. This was associated with the practitioners of healers, herbalists and
black magic and evil crafts.
In ancient India, cats are held as sacred.
In Scandinavian countries, the bride would try to marry on a Friday that was in
favor of the cat-goddess Freya.
The cat teaches us about respect and dedication. The sensual nature and will
only accept affection on its own terms. A proud animal, independent and capable
of viewing both worlds at one time. In watching a cat catch a mouse it will sit
quietly with much patience and observe the patterns of the prey.
The cat will begin to see beyond and know the mouse’s next move therefore
interfere with this and capture the prey.
Cats signify, mystery, magic and Independence. Fertility is also a sign of the
cat.. According to the common Western belief, it is only unlucky for a black cat
to cross your path. However, if a black cat with no tail approaches but does not
cross, it is considered a good omen.
Black cat crossing a side path is actually good luck.
A cat with no tail or docked tail, by faith, symbolizes luck and solves various
problems.
The tail of a black cat is considered lucky in that it is a remedy (in those
olden days) for any type of health difficulty.